Check Out This Mod. Another wonderful home by interior designer/modder Elianora can be found inside the garage of Sanctuary’s Red Rocket – after you install this mod, of course. This was her first player home mod in Fallout 4, and it instantly became a hit thanks to the hand-placed decoration. And of course, the unique clutter.

Ever since there have been open-world games, players have wanted to settle down and find a home for their characters to live out their days.

Some time ago you may even have seen people role-playing living under a tree or a bridge on certain games, especially MMOs. Nowadays there’s usually some sort of housing option, if not an entire base of operations for your character to plan out their next move.

Fallout 4 takes all of this one degree further, introducing the Settlement system and allowing the player not only to set up their lodgings but to manage entire communities down to the individual tasks of its dwellers.

Did you want a house? Have fun managing your own post-apocalyptic town!

And yet when it’s all said and done, where do you rest?

Are the walls you’ve brought up around you enough? Do you feel at peace within your quarters?

If these thoughts assail your character every night and you’ve yet to find a place to call home, allow me to act as your real estate agent as we take a look at some incredible home mods you can add into your Fallout 4 experience.

First up in our tour through the most coveted housing in the Commonwealth is the humble Home Plate, albeit with a much-needed improvement to give the place some personality and style.

Unlike many other Home Plate overhauls, Grrlie’s doesn’t completely take over the place, leaving some sizable free space for the player to add their own personal touch.

You’ll feel as if you just left college and to live on your very first flat, just considerably more irradiated.

Other very appealing accommodations to consider renewing among the vanilla settlements happens to be the Croup Manor, notable for its isolated location in the Nahant peninsula.

This lore-friendly mod from author Rdunlap focuses on improving the manor to make it a livable space without conflicting with the general layout.

Many walls and ceilings are repaired, along with the look of some internal areas, and a porch was added to the 3rd floor.

It remains somewhat run-down, as you’d expect from such a building, but after you take care of the ghouls, it’ll become the perfect Wasteland mansion.

Much like the Croup Manor, modder Rdunlap gave the Jamaica Plain a completely repaired base structure, sealing the gigantic hole previously occupying half the available space.

It introduces no new textures, only utilizing the vanilla ones to respect the game’s artistic direction and cohesiveness. Making it the ideal mod for the players that chase the “enhanced vanilla” experience.

The Coastal Cottage in vanilla Fallout 4 always struck me as a badly thought-out settlement option.

Not only is it unappealing, but there’s also very little space you can actually build in.

Now thanks to modder RedRocketTV, that shouldn’t be a problem!

If you can’t build on the property you just have to build under it.

This mod enables you to build a 14-room interior cell bunker you may call your player home, directly below the Coastal Cottage.

If you played a lot of Fallout 3 and New Vegas then you’re familiar with the kind of player housing mod people used to come up with.

Classic-styled, comfy homes with a lot of wood, a lot of warm colors, and a lot of static decorations.

Other than being pre-decorated and ready to be inhabited immediately, this player home includes many scripted interactive features. So have fun discovering those too!

Isn’t it annoying to find NPCs sleeping on your preferred bed or going through your stuff while in a settlement?

I don’t appreciate the breach in privacy either… and neither does modder Pra, who’s decided to solve the issue by adding 11 different interior cells to serve as your private quarters in any settlement.

You just need to build a door leading to it, and voilà – your very own highly-customizable basement.

Sanctuary Hill used to be a beautiful place, perfectly designed for the average American family to live out the Suburban dream – and would still be if Codsworth had done its damn job.

But don’t worry. Thanks to modder TheCoolest7248, the robot butler has been able to right its past wrongs.

To make this place actually livable, all major damage to walls and ceilings have been repaired in all of the houses.

Codsworth also had time to improve the textures, and some houses seem to never have been looted at all – as they’re full of furniture, decoration and a story to tell.

As anyone with even the most basic knowledge of the modding scene for Bethesda games must already know, you can’t have a player home ranking without at least one mod by Elianora showing up.

In this case you can expect many, starting with this Thirty-Yard Bunker in Diamond City. 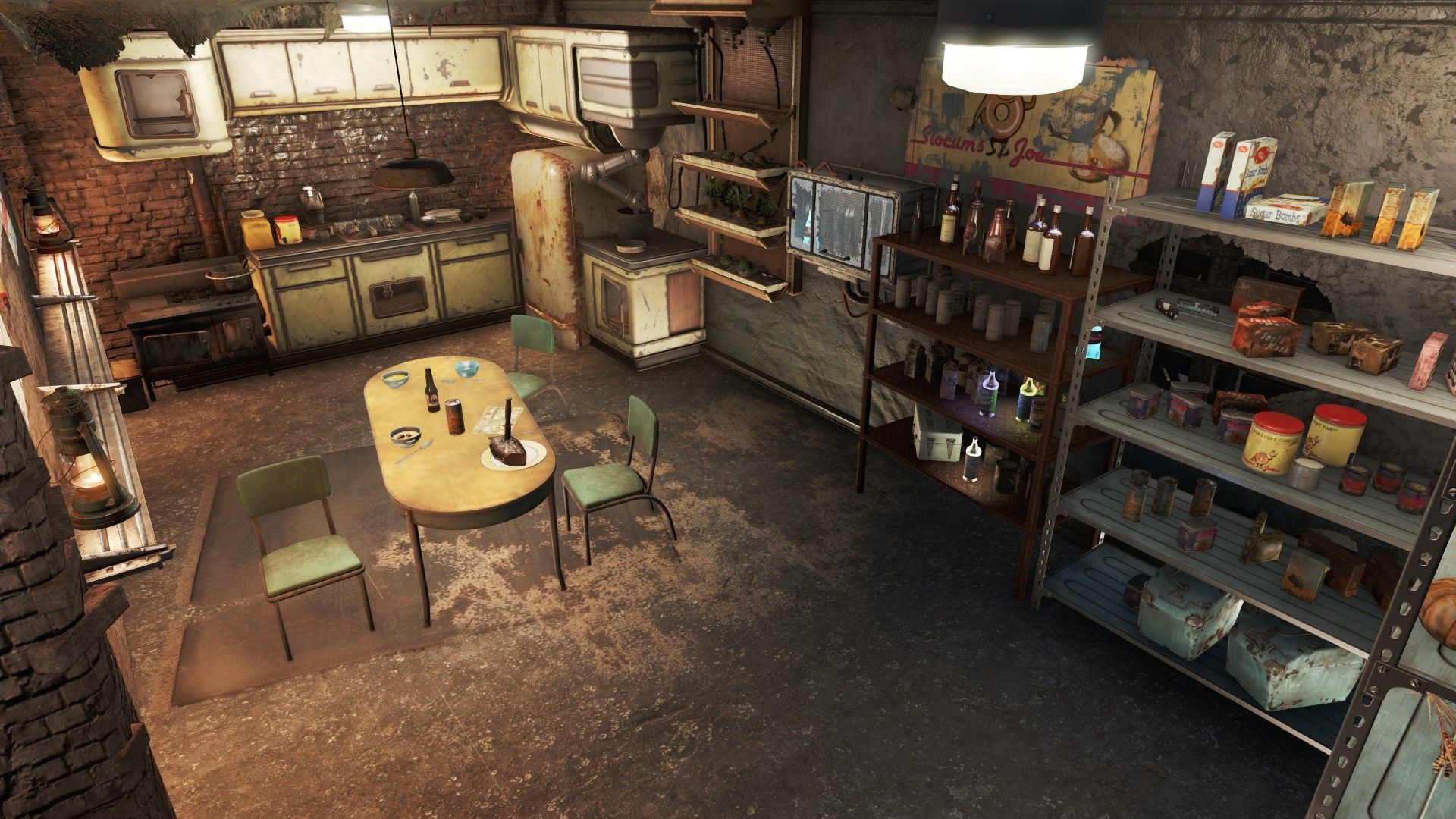 In this comfy underground home you’ll find many of the basic crafting stations and other such necessities, along with a shelf to display your bobbleheads and a mirror to change your appearance.

Ever since I first boarded Cid’s Airship in FF3, I’ve wanted to live in an airborne vessel.

It’s simply the best kind of fantasy vehicle there is!

Thanks to this mod by creator Blary, it’s now possible to set up a home inside a small skyship traveling the Commonwealth and stopping at either Bunker Hill, Diamond City or Lexington.

Inside you’ll have access to the main room, a crafting garage with your basic necessities covered, and even a Power Armor station.

The skyships in the Fallout universe are far from looking like my Final Fantasy dreams, but they’ll have to do.

Another wonderful home by interior designer/modder Elianora can be found inside the garage of Sanctuary’s Red Rocket – after you install this mod, of course.

This was her first player home mod in Fallout 4, and it instantly became a hit thanks to the hand-placed decoration. And of course, the unique clutter.

It even has different lighting depending on the time of day!

Even after so many years of Fallout 4 modding, the Rockin’ Red Rocket remains among the most comfortable and cozy accommodations you can install.

Before the Creation Kit was released and Elianora got down to business, one of the best options for enhanced player homes was Basement Living by FadingSignal.

It simply adds 10 different standalone basement-type player homes, equipped with anything you need to customize them yourself.

A private basement bunker, a storage warehouse, and a military bunker are only some of the varied housing options.

To access them just set up a door leading to the interior cell in any settlement.

For someone as important as the Sole Survivor, you’d think the Minutemen could spare a private room in their Castle.

Elianora has improved the Minutemen’s hospitality by granting you access to an interior cell in the Minutemen Castle.

This home is packed to the brim with antique-looking decorations, display spaces for your various valuables, and sources of very moody light.

This one is perfect for the smart survivors looking for a place to store all of their books and organize their investigations on their quest to find Shawn.

If rather than a detective you’d rather be an undercover Railroad operative, then you’ll love the dark and moody atmosphere of Elianora’s Railroad HQ private chambers.

Complete with a corkboard, plenty of historical pictures, and a cat, this new room in the Railroad HQ was made to house the most passionate of liberators.

As such, it gives you access to all crafting stations and the like, while also allowing you to display your clothing sets as badges of honor to remember your victories.

Among my favorite features in this mod is the kitchen, which looks incredibly natural and lived-in.

As a Brotherhood of Steel fighter, you never expected comfortable beds or ample accommodations – you are a soldier, and all you need can fit in a bag.

But with honor comes rank, and with rank, you’ve been awarded a glorious soldier’s home in Prydwen with ample storage room, every necessary workbench, and direct access to Fast Travel so you don’t have to deal with three separate loading screens on entering from the Wasteland.

One of the best bits about this mod is how perfectly Elianora captured the style of the area and reproduced it inside.

The Brotherhood of Steel banners were also a nice touch.

It’s the same old story – you were looking to move from your run-down house in Boston, low on cash, and found this giant, luxurious late-18th Century mansion at a strangely low price.

Upon entering, you can’t shake the feeling that something sinister is going on.

It seems the old British Embassy still holds some secrets.

Even if you’re not up for spooky stories, this wonderful mod by Galejro is one of the most tastefully decorated player homes available, and the custom classical music soundtrack contributes to the atmosphere in a way few mods achieve.

I always felt becoming Director of the Institute was the best player-fantasy you could achieve in Fallout 4.

It’s the seed of future civilization, where everyone looks forward into the future, and you’re at the helm.

To appropriately honor this high status, Elianora has overhauled your Director’s Quarters to not only provide you with the tools you need to craft humanity’s progress but also enough space to house your gigantic ego if you follow that route.

This is probably the least cluttered player home from Elianora, which also makes it one of the most relaxing.

The white color and sufficient lighting also contribute to making it feel calm and relaxing.

One of the most immersive player housing mods I’ve ever seen is the Commonwealth Express Courier Stations, which adds a total of eight small stations in various locations throughout the Wasteland to be used by couriers and, of course, you.

This mod by RedRocketTV takes inspiration in the Mojave Express Courier Stations mod for Fallout New Vegas, which essentially did the same.

Every station has the basics for crafting and survival, including workbenches connected to common storage and access to fresh water, making them perfect for survival playthroughs.

If rather than finding new lodgings all across the Commonwealth you’d rather take it with you on your journey, consider taking ownership of the SSBN Dauntless, the only player home that’s able to travel up and down the coast.

As if that wasn’t amazing enough, this unique submarine-based player home by NexusMods user CyberMoses is built 100% to scale, meaning that the interior of the vessel matches the size of its exterior appearance.

In practical terms, it’s a very functional mobile home, with all crafting necessities covered and even a barber’s chair to alter your looks.

My personal favorite player home in the immensity of the Commonwealth is this RV just outside Abbot’s home in Diamond City.

They may not be the most spacious lodgings I can aim for, but the way Elianora has used the limited room inside this tiny metal box to fit in so many details is a wonder to behold for anyone who’s ever enjoyed playing Tetris.

Plus, the small size and moody lighting make it feel like a really cozy option for an adventurer who’s not even home that often.

However, if you’re looking for the one most amazing and complete player home in Fallout 4, the title has to go to Elianora’s overhaul of the faction housing at Vault 81.

This gigantic pad isn’t only high in detail but also rich in space, all occupied by themed rooms varying in decoration.

There’s the main room, a laundry, a gym, and even a shower area so you can take a bath after working out – for maximum immersion.

I just hope you managed to avoid getting infected by Mole Rat Disease on the way here. 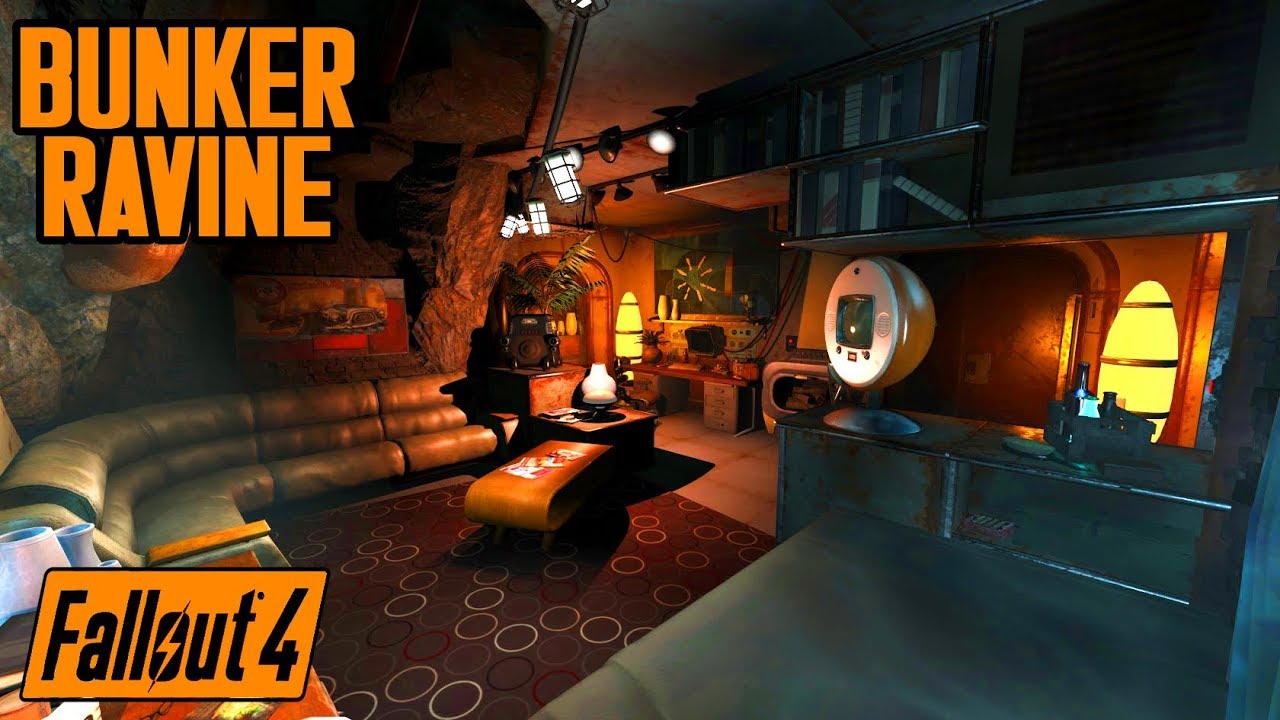